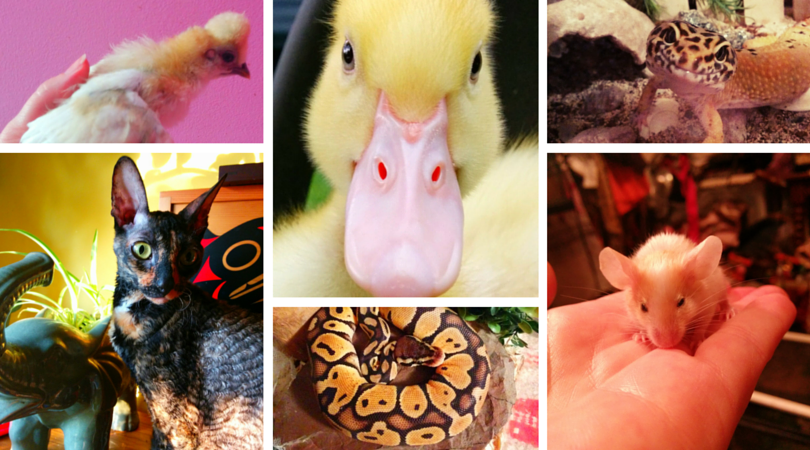 
Editor’s Note: In July 2015, Pets Adviser rebranded as Petful, the site you see today. In honor of that occasion, we asked some of our regular readers to tell us what “being petful” means to them. Here’s one of their responses.

By Kirsti Stephenson
Subscriber since April 2013

Being petful has been an extremely significant part of my life since I was a young child — from adopting a beautiful beagle named Sunshine into our family who grew up by my side since the age of 5, to living as an adult in a verifiable zoo house.

Right now, my animal children include:

Growing up camping in Algonquin Park with my parents, sister and friends, I would abscond with all my mother’s campfire pots and pans (much to her dismay) to create “habitats” full of leaves and twigs or water and mud for wild creatures such as minnows, clams, bloodsuckers, daddy long leg spiders, caterpillars, moths, and bugs of all shapes and sizes.

Being petful is not just a matter of caring for an animal. It is a serious responsibility to rear and educate them, in addition to exposing them to other people to help those people get past their preconceived misconceptions about them (for example, about snakes and spiders). It’s about teaching young people to love and respect all the creatures we share the planet with, domesticated and wild, including endangered species that existed here before us.

It is a privilege and a blessing to share your time, energy, enthusiasm and everlasting affection with your “petful” family.

As I am recovering from a car accident, I especially realize that without the love and support of my pets, I would be incredibly depressed and not as encouraged to cope with my daily pain. My babies are so spoiled and coddled that if they could comment right now, they would describe me as their beloved pet rather than the other way around. Which is perfectly fine by me!

And so, I feel fortunate and grateful to be a petful human, sharing my ambassador animals with anyone willing to learn and appreciate my incredibly diverse and special family members. They all have shaped the definition of love for me, and opened my heart forever to another level of compassion and enrichment that you can only achieve by being a positive, passionately petful person.

What does being petful mean to you? If you’re on Twitter, tweet your response to that question and be sure to use the hashtag #petful. We’ll pick 3 people to get one of our cute new tote bags!