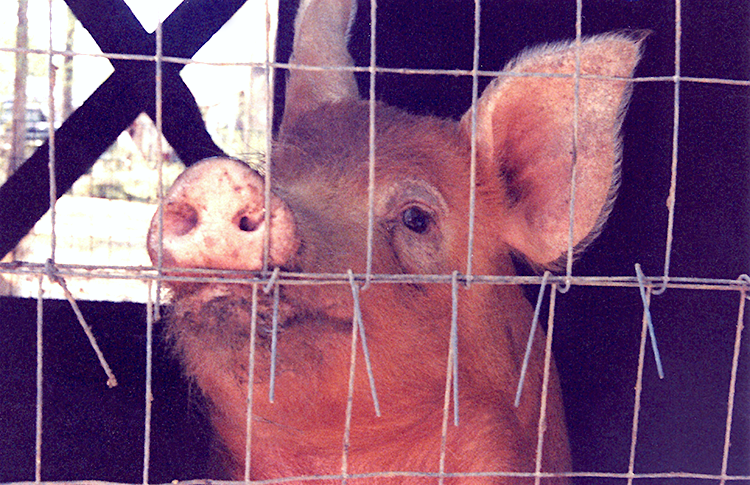 
Esther was a “mini” pig taken in by Derek Walter and Steve Jenkins of Ontario, Canada. The couple could hold her in the palm of their hands.

Fast-forward to 4 years later, and surprise: Esther is a 650-pound, full-sized hog who weighs almost 10 times more than was expected.

While their big “baby” now lives at an animal sanctuary with 10 other pigs and various other animals, Walter and Jenkins don’t regret their time with her. They’ve written a book about their life with Esther titled Esther the Wonder Pig: Changing the World One Heart at a Time, and Esther has a quarter-million Instagram followers.

For many years, I was a pig fanatic. Pig-themed dishes, pig earrings, pig blankets — you name it; if it had a pig on it, I had to have it. Even today, I still have much of my collection, including a life-sized concrete pig named Jenny that stands in my yard.

But what I really wanted was an actual pig of my own.

That wish came true when I won the top prize — a live pig — in a raffle at a local benefit. Though I could never prove it, I always suspected my win was prearranged, given that everyone knew how much I loved oinkers.

When my little pink bundle of joy was presented to me, my heart swelled with pride. I already had 2 sons, so this was an added blessing.

As I held Amar, named for the Omar Shriners, she rubbed her snout across my face as if saying, “Hooray, I’m going to a real home.”

More Than We Could Handle

At my house, just outside town limits in Scranton, South Carolina, we kept Amar in an ample-sized pen. Although farm animals were prohibited in the community, horses and chickens were abundant, so I figured one little pig wouldn’t cause any problems.

Sure enough, all of the neighbors enjoyed visiting Amar and hearing her oink. I know the smell of her pen sometimes got a little strong, but no one ever complained.

Amar did have one major drawback: She grew at an enormous rate of speed.

Within a few months, she was humongous, and I realized this hog was getting to be more than we could handle. With a saddened heart, I returned her to the farmer who had donated her to the raffle. The farmer assured me Amar wouldn’t be slaughtered but would live a long life on the farm, rearing piglets of her own — and she did.

Surprisingly, that experience wasn’t enough to wean me from wanting a potbellied pig — one I could dress up and take for walks on a leash.

My nephew fulfilled that wish for me, gifting me with a potbellied pig he had bought at a flea market. Penny was so tiny and perfect.

On her first night with me, I decided to give her a bath — mistake number 1. She didn’t like water and wanted no part of being in a tub. Just as I got her all lathered up, out of the tub she jumped — slinging sudsy water all throughout the house. When I finally managed to catch her, she let me know pretty quickly she wasn’t a cuddler.

She jumped all over the furniture. At feeding time, she made a mess. And it didn’t take long to figure out that potty-training a pig, no matter how small said pig was, would be an almost impossible task.

Too Hefty for the House

About 4 days after Penny came home with me, I knew I wasn’t meant to be a pig parent. I passed her on to a friend who managed to keep her for a few months — even after she transformed into a full-fledged hog.

I have to give my friend credit, though. Even as Penny grew by leaps and bounds, the friend tried to give her the good life, allowing her to continue living in the house. For a while, Penny got a taste of hog heaven as she relaxed in her own recliner while watching TV and smacked on her favorite treat: chewing gum.

Eventually, the time came when Penny’s transition from pot-bellied pig to hefty hog landed her in the same position as Amar. She, too, had to go back to life on a farm.

I never stopped loving pigs, but I have to admit: My opinion of them changed once I had firsthand experience in trying to keep them in the home.